The Block NZ 2013 has had it's first set of room reveals - have you been sucked in to watching like we have?

All of the rooms featured great design elements, as well as some things that weren't so hot - Alisa and Cohen's sympathetic and classically styled bedroom highlighted some issues that we often find trip people up - particularly in period homes, so I thought they'd be worth a mention. 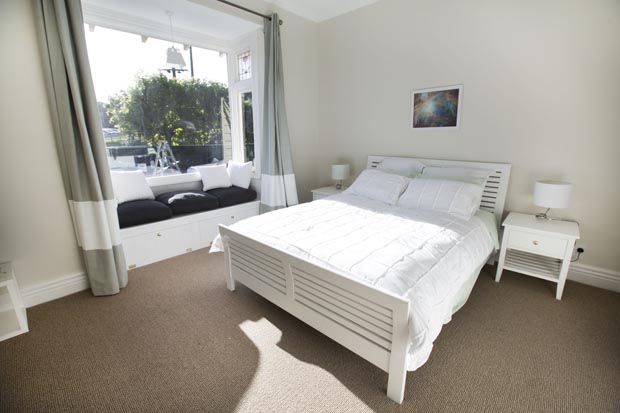 1) The window seat squabs looked plush and comfy - certainly a positive characteristic for a sunny spot that you'd want to spend a decent amount of time in! However when putting in bench/day bed or seat squabs, think really carefully about just how they will be used. Do you want to lie on them? If so, a single squab is the way to go as you won't find your rear end sinking into the gap between, or sliding around on split squabs! Are they going to be used predominantly for sitting? ie. on a bench seat round a dining table - if so, a single squab can create a banana effect when sat on in the middle, so cutting the squab down into smaller portions will create designated 'bums on seat' spaces without the ski slopes at either side.

2) It is common to be nervous about choosing large scale pieces of artwork or furniture for your home, but traditional rooms like Alisa and Cohen's bedroom cry out for items of similar large proportion. Don't be afraid to go big - a larger piece of artwork over their bed would have helped to close the gap between floor and ceiling. If all your furniture is low and your artwork small, the room will feel disjointed. Create balance with a combination of low, medium and high items that draw the eye around and up through the room, and the use of large, more solid pieces of furniture will create a visual anchor point in the space.

3) Following on from the above point on scale - when it comes to lighting, bigger is generally better!
In a room with a higher then average stud we find many clients underestimate the size of shade or fitting that works best. Just like high walls need larger furniture and artwork to fill them, a massive spatial void above your head requires a larger light fitting to balance the negative space! I think a simple, clean lined, brushed steel or antique bronze finished chandelier would have worked wonders in that room. What do you think?